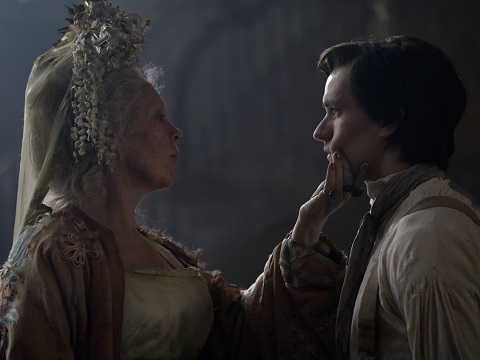 Great Expectations, the limited series adaptation of Charles Dickens’ classic novel from FX and BBC, is giving fans an early sense of the grandeur and lavish production with an advance, first look images of Olivia Colman starring as “Miss Havisham” alongside Fionn Whitehead as “Pip” and Shalom Brune-Franklin as “Estella.”

Great Expectations is the coming-of-age story of an orphan nicknamed “Pip.” Dickens first released it in a series of weekly chapters beginning in December 1860 before it was subsequently published as a novel.

Great Expectations is the second Dickens adaptation penned by Knight, following the hit limited series A Christmas Carol. Great Expectations and A Christmas Carol are the first two in a series of adaptations of Dickens’ novels commissioned by Piers Wenger, former Director of Drama and Charlotte Moore, Chief Content Officer at the BBC and FX. The BBC and FX also partnered on the acclaimed drama series Taboo, starring Tom Hardy, written by Steven Knight and produced by Knight, Hardy, Chips Hardy, Scott, Baker and Crowe.

FX, a division of Disney General Entertainment, is a global multiplatform brand that develops, produces, commissions and markets original programming for Hulu and the FX and FXX linear channels in the U.S., and Star+ in Latin America and Disney+ in all other international territories. The FX brand mark appears above the title across its entire slate of originals. Over the past two decades, FX has been responsible for some the most-critically acclaimed and award-winning shows on television. Some of the brand’s current and legacy titles include the dramas American Horror Story, American Crime Story, The Americans, The Bear, Damages, Fargo, Justified, Nip/Tuck, The Old Man, Pose, Rescue Me, The Shield and Sons of Anarchy; the comedies Archer, Atlanta, Better Things, DAVE, It’s Always Sunny in Philadelphia, Reservation Dogs and What We Do in the Shadows; and a growing slate of docuseries and documentary films.

Great ExpectationsTV & Streaming
« Previous
Bring on the Men! Peacock Reveals Second Group of Islanders Looking for Love on This Season of “Love Island USA”
Next »
Kleo Netflix Release Date; When Does It Start?