Amazon Prime Video and IMDb TV today revealed exciting, new details and exclusive, first-look content from several of their most hotly anticipated series, including The Wheel of Time, EVANGELION:3.0+1.01 THRICE UPON A TIME, Leverage: Redemption, S.O.Z. Soldier or Zombies, and I Know What You Did Last Sumer during its multi-title Comic-Con@Home panel. Moderated by TV host Tim Kash, the panel featured Q&A sessions with Rafe Judkins (The Wheel of Time), Hideaki Anno (EVANGELION:3.0+1.01 THRICE UPON A TIME), Nico Entel (S.O.Z. Soldiers or Zombies), Sara Goodman (I Know What You Did Last Summer) and series stars and directors Beth Riesgraf & Noah Wyle (Leverage: Redemption), who for the first time unveiled key dates, first-look teasers, series artwork and more from their respective projects.

SERIES: The Wheel of Time 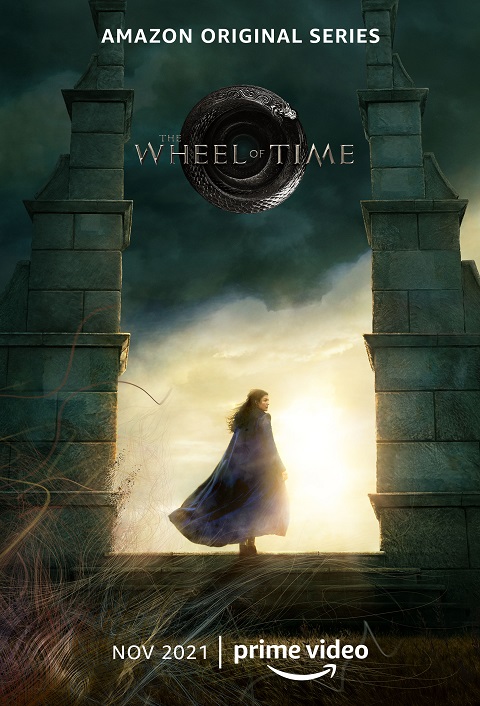 ABOUT: The Wheel of Time is one of the most popular and enduring fantasy series of all-time, with over 90 million books sold. Set in a sprawling, epic world where magic exists and only certain women are allowed to access it, the story follows Moiraine, a member of the incredibly powerful all-female organization called the Aes Sedai, as she arrives in the small town of Two Rivers. There, she embarks on a dangerous, world-spanning journey with five young men and women, one of whom is prophesied to be the Dragon Reborn, who will either save or destroy humanity.

ABOUT: EVANGELION:3.0+1.01 THRICE UPON A TIME is the fourth and final chapter of the new theatrical edition of Evangelion. The blockbuster franchise is a Japanese anime pop-culture phenomenon based on the story of Evangelion, an artificial human and multipurpose humanoid weapon, and the Angels, an unknown life-form which takes place after the Earth has been shattered by a cataclysmic event.

ABOUT: In this new iteration, and new world, the Leverage crew have watched as the rich and powerful continue to take what they want without consequence. Grifter Sophie Devereaux, thief Parker, hitter Eliot Spencer, and hacker Alec Hardison have watched the world change over the last eight years. Since their last job, it’s become easier – and sometimes legal – for the rich to become richer and the powerful to squash anyone who gets in their way. To address the changes in the world around them, the team finds new blood in Harry Wilson, a corporate lawyer who is looking for redemption after realizing he’d been sitting on the wrong side of the table for his entire career, and Breanna Casey, Hardison’s foster sister who has a knack for computers, robotics, and getting into trouble.

ABOUT: To avoid extradition, the charismatic and unpredictable drug lord Alonso Marroquin escapes from a Mexican prison to hide in a remote facility located in the middle of the desert. On the U.S. side of the border a U.S. Army experiment with minipigs conducted in a military base goes wrong and the Mexican police unit pursuing Marroquin gets infected, transforming themselves into a new enhanced zombie species with special abilities. The army and this new species converge on Marroquin’s hideout where battle for survival will begin.

· SERIES: I Know What You Did Last Summer

· ABOUT: I Know What You Did Last Summer is a modern take on the hit 1997 horror film that honors the same chilling premise – in a town full of secrets, a group of teenagers are stalked by a mysterious killer a year after a fatal accident on their graduation night. The project is based on the 1973 novel by Lois Duncan.

Prime Video offers customers a vast collection of movies, series and sports – all available to watch on hundreds of compatible devices.

· Prime Video Channels: Prime members can add channels like Paramount+, BET+, EPIX, Noggin, NBA League Pass, MLB.tv, STARZ and SHOWTIME – no extra apps to download, and no cable required. Only pay for the ones you want, and cancel anytime. View the full list of channels available at amazon.com/channels.

· Instant access: Watch at home or on the go with your choice of hundreds of compatible devices. Stream from the web or using the Prime Video app on your smartphone, tablet, set-top box, game console, or select smart TV.

· Enhanced experiences: Make the most of every viewing with 4K Ultra HD- and High Dynamic Range (HDR)-compatible content. Go behind the scenes of your favorite movies and TV shows with exclusive X-Ray access, powered by IMDb. Save it for later with select mobile downloads for offline viewing.

· Expansive Catalog: IMDb TV is a modern television network, offering viewers ambitious originals, including Leverage: Redemption, Alex Rider, Moment of Truth and Top Class: The Life and Times of the Sierra Canyon Trailblazers, and an always updating library of broadly appealing hit movies and TV shows that customers would expect to see on a paid service. IMDb TV adds new titles to the service every month across a wide selection of genres including comedy, family, romance, thrillers, science fiction, documentaries, horror, and more.

· Half the Ads: IMDb TV has half the ads of traditional linear TV.

· Instant Access: IMDb TV is available as an app on Fire TV and on IMDb apps across hundreds of devices, as a free Channel within Prime Video, and on the IMDb website. To use IMDb TV on Fire TV, customers can find the icon in the “Your Apps & Channels” row or using the Alexa Voice Remote, simply say “Alexa, go to IMDb TV.” IMDb TV is also available as an app on third party devices including Roku, Xbox One, Xbox Series X|S, Sony Android TV devices, Chromecast with Google TV, LG Smart TVs, PlayStation 4 consoles, NVIDIA Shield, and TiVo Stream 4K.

Sony Pictures Television (SPT) is one of the television industry’s leading content providers, producing, distributing and carrying programming worldwide in every genre and for every platform. In addition to managing one of the industry’s largest libraries of award-winning feature films, television shows, and formats, SPT is home to a thriving global content business, operating a robust portfolio of wholly-owned and joint-venture production companies across the U.S., Europe, Latin America, and Asia Pacific, as well as linear and digital channels around the world. SPT is a Sony Pictures Entertainment Company, a subsidiary of Tokyo-based Sony Group Corporation.